Loijipu is a highly protected rhino calf living at the Sera Wildlife Conservancy, Northern Kenya. His primary caregiver is Salome Lemalasia who has been working as a community ranger since 2015. Although she wasn't at ease around him when she met him at first, today, the relationship between them is special: _"__I used to be afraid of him when I left him, he would cry._I have made an effort to stay with him and we are now used to one another. I treat him like my own child.", she explains.

Loijipu is a male rhino calf, the 2nd one born in the Sera Rhino Sanctuary. He was separated from his mother so as a mother of four children herself, they developed a special kind of bond,  "I've taken care of him since he was young. I was giving him milk formula, he is now able to graze on his own in the wild on my watch".

After spending 18 months at the nearby Reteti Elephant Sanctuary, he was put in the Rhino sanctuary. Here the goal is to help him develop the skills he needs to survive in the wild.

"At times when we're out in the wild and we come across elephants, I quickly climb a tree while he chases them away", says Salome.

Black rhinos are the smaller of the two African rhino species. Because of poaching and habitat loss, Black rhinos are considered critically endangered. But thanks to persistent conservation efforts across Africa, their numbers have recently increased. 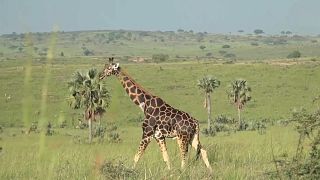