The United States on Thursday urged the Democratic Republic of Congo to protect UN peacekeepers after deadly anti-UN protests in the country's volatile east claimed at least 19 lives.

Three peacekeepers, from India and Morocco, were killed Tuesday in an attack on a base of the UN mission in DRC, known as MONUSCO, which many local people resent as having failed to stop decades of armed conflict.

"We call on the national and local authorities in the DRC to ensure the protection of MONUSCO sites and personnel and for protesters to express their sentiments peacefully," he said.

The United States -- the top funder of UN peacekeeping operations -- voiced appreciation for the Kinshasa government's deployment Wednesday of soldiers and police to boost security.

The UN Security Council, in a rare joint statement amid soaring tensions between the West and veto-wielding Russia, on Wednesday condemned the attacks in DR Congo "in the strongest terms" and warned thar targeting peacekeepers may constitute a war crime.

Among the biggest peacekeeping force

MONUSCO is one of the world's biggest peacekeeping operations.

But it has regularly come under criticism in the troubled east, where many accuse it of failing to do enough to end decades-long bloodshed.

More than 120 armed groups roam the volatile region, where civilian massacres are common and conflict has displaced millions of people.

In Monday's unrest, hundreds of people in Goma blocked roads and chanted hostile slogans before storming MONUSCO's headquarters and a supply base there.

Protesters smashed windows and looted valuables, while helicopters airlifted UN staff from the premises and security forces fired teargas in a bid to push them back.

The unrest in Goma continued on Tuesday, with the fatal shooting of a man near the supplies base, an AFP correspondent saw.

Congolese security forces held back a crowd outside the facility, some of whom carried placards such as "Bye-bye, MONUSCO."

At Goma's CBCA Ndosho Hospital, the head of administration, Serge Kilumbiro, told AFP that 28 people had been admitted with gunshot wounds on Monday and eight more on Tuesday.

In Beni, about 350 kilometres (215 miles) to the north, soldiers deployed on the road leading to the MONUSCO base there on Tuesday, while protesters burned tyres. Shops, markets and petrol stations were closed.

In the town of Butembo, security forces dispersed protesters who had gathered in front of a MONUSCO base, witnesses said.

Ngoma, the local police chief, said some youths were "armed".

The latest protests come after the president of the senate, Modeste Bahati, told supporters in Goma on July 15 that MONUSCO should "pack its bags".

They coincide with the resurgence of the M23 -- a militia that lay mostly dormant for years before resuming fighting last November.

The rebels have since made significant advances in eastern Congo, including capturing the North Kivu town of Bunagana on the Ugandan border.

The UN first deployed an observer mission to eastern Congo in 1999.

In 2010, it became the peacekeeping mission MONUSCO -- the United Nations Organization Stabilization Mission in the Democratic Republic of the Congo -- with a mandate to conduct offensive operations.

It has a current strength of about 16,300 uniformed personnel, according to the UN.

MONUSCO on Monday said it "vigorously condemned the attack" on its premises in Goma, "carried out by a group of looters on the sidelines of a demonstration which, in addition, was banned by the mayor of Goma".

In a statement on Monday, Khassim Diagne, the deputy special representative of the UN secretary general to MONUSCO, said the peacekeepers were there to protect civilians.

"The incidents in Goma are not only unacceptable but totally counterproductive," he said. 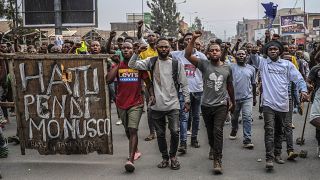 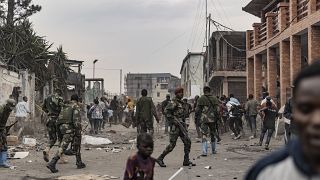 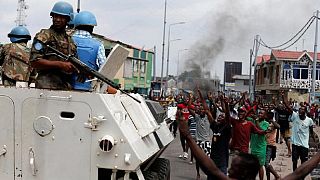