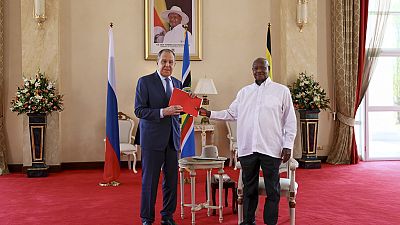 "We confirmed our positions when it comes to the reforming of the U.N. Security Council," Lavrov said. "The main problem here is the underrepresentation in the Security Council of developing states and the only solution to this problem is bigger representation of Asian, African and Latin American countries."

Uganda was the third stop on Lavrov's tour of Africa as Russia tries to change the narrative amid the Ukraine war. Lavrov will end his trip with a visit to Ethiopia, the headquarters of the 54-nation African Union.

African leaders in recent months have pressed for Africa's permanent representation on the U.N. Security Council. The matter of reforming the 15-member council has provoked debate for decades.

Museveni earlier this year said reforms would stop what he described as "mistakes" such as the removal from power of the late Libyan leader Muammar Gadhafi, who was captured and killed by an Nato alliance operation.

While there is widespread support for revamping the council to reflect current global realities, efforts have been mired by national and regional rivalries.

The African Union has called for the council to be expanded to 26 members with six additional permanent seats, including two for Africa with veto power, and five non-permanent seats for Africa.

Uganda is one of 25 African nations that abstained or didn’t vote in the U.N. General Assembly resolution condemning Russia's invasion of Ukraine earlier this year. Many nations on the continent of 1.3 billion people have long-standing ties with Moscow, dating back to the Cold War when the Soviet Union supported their anti-colonial efforts.

Museveni said Tuesday that Russia had been a friend to Uganda for more than 100 years. Russia cannot suddenly become an enemy because of its rivalry with the U.S., he said.

"We want to make our own enemies, not fight other people's enemies," Museveni said. "This is our doctrine."