Hundreds of Tunisians took to the streets of central Tunis late Monday to celebrate the predicted result of the referendum vote, after an initial exit survey suggested the majority of voters had voted in favour of changing the country's constitution.

"I wish him victory against his enemies, we hope that God will protect him from the wicked. Congratulations, congratulations, look after yourself Kais Saied!" said one supporter, Haida, who would only provide her first name.

The new constitution has split public opinion, however.

Spearheaded by President Kais Saied, critics say if voted in, it will formalize his power grab and reverse hard-won democratic gains in the North African nation.

Monday's referendum marks one year to the day that Saied froze Tunisia's parliament and dismissed his government — a move derided by critics as "a coup" but celebrated by Tunisians who had grown exasperated with the country's political elites and years of economic stagnation.

In the year since then, Saied has given himself the power to rule by decree and has fired dozens of judges, decisions that have provoked a series of protests.

The new constitution gives the office o f the president all executive powers and removes key checks and balances. The power of Tunisia's judiciary and parliament would be greatly reduced.

An official preliminary result is expected to be announced by Wednesday. 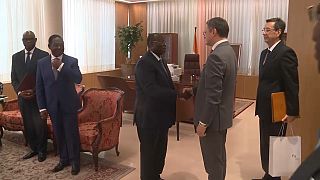