At least 5 people have already died and 50 were injured in protests in Goma, Eastern DRC this Tuesday, according to the Congolese government. These rallies have been taking place around UN's logistics base in North Kivu since Monday to demand the departure of the MONUSCO mission claiming it is failing to combat armed groups and insecurity.

According to an AFP journalist on the ground, a young protester was shot in the morning inside the base after hundreds of people surrounded it and attacked it.

In the city of Beni, 350km north of Goma anger also spread in several neighbourhoods, tires were set on fire and gas stations along with shops had to close.

14,000 peacekeepers are currently in the country working for UN's peace mission set since 1999. 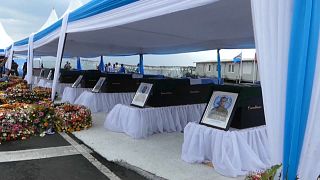