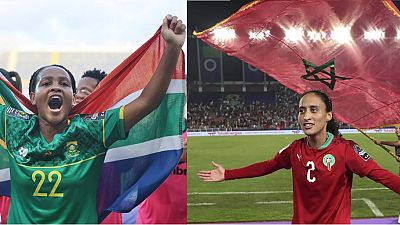 Hosts Morocco crushed the dreams of the Super Falcons, Monday, to join South African in the final. For the first time in their history, the Atlas Lionesses will play the final of the Women's AFCON.

History for African football was made on and off-the pitch Monday. The semi-final Nigeria-Morocco, played at the Complexe Sportif Prince Moulay-Abdellah in Rabat, is now the most attended WAFCON fixture. 45,562 fans came to cheer their squad and there was no lack of spectacle.

9-time WAFCON champion Nigeria eyed a 10th title and Morocco was looking for a feat. If the Moroccans were overwhelmed by Nigeria’s experience, neither team scored during the first half. It is in the 62nd minute that Kanu Uchenna secured a goal for Nigeria as she took advantage of a mistake by Moroccan defender Yasmine Mrabet. If relief reigned among the Super Falcons who had become a 10-woman squad, it would not last long.

In the 66th minute, Sanaa Mssoudy's goal enabled the North Africans to catch up. As the fierce battle continued, Nigeria earned yet another red card. Rasheedat Ajibade was therefore excluded. By the end of regulation time and despite extra time, the teams were tied.

With 5-4 win, Morocco will play South Africa Saturday as both teams will be hopeful to clinch the Women's Africa Cup of Nations title for the first time. Moreover, this year, a 150% increase in the prize money from $200,000 to $500,000 for the winning team was officially announced. The total prize money going from $975,000 to $2.4m.

It was a close contest in the Mohamed V Stadium of Casablanca. If the Banyana Banyana had the highest ball possession percentage, the Copper Queens had the most corners and shot more during the game. However, South Africa and Zambia missed goal chances during regulation time.

It is a last-minute penalty that determined the winner. Linda Mothalo's goal condemned Zambia to defeat in the semifinal.

The Queens will be back on the Mohammed V Stadium pitch Friday, July 22 to play Nigeria for a bronze medal.

Morocco, Nigeria, South Africa and Zambia are already assured to contest in the 2023 World Cup -hosted by Australia and New Zealand- scheduled from July 20, through August 20.