Togo's armed forces said Thursday they were responsible for a recent explosion that killed seven civilians and wounded two others, after mistaking them for jihadists.

The blast occurred in the prefecture of Tône, near the border with Burkina Faso, where a Sahelian jihadist insurgency threatens to spread to coastal West Africa.

Togolese troops are deployed in the area to try to contain a spillover of the jihadist threat.

In a statement Sunday, the army said it had opened an investigation "to determine the circumstances of this explosion and identify the perpetrators."

The chief of staff of the Togolese armed forces, General Dadja Maganawe, concluded on Thursday that a plane had wrongly targeted civilians.

"On the night of July 9 to 10, at around 1:30 a.m., an explosion caused several victims in the village of Margba, in the Tône prefecture," he said in a statement.

General Maganawe said the army had received "consistent intelligence reports of threats of infiltration by armed gangs intent on carrying out terrorist attacks" against local communities.

"Faced with the imminent danger," he said, the commander leading an operation codenamed Koundjoare "stepped up surveillance and ground and air control of the area indicated.

"It was during these operations that an aircraft on night patrol mistakenly targeted a group of people it mistook for a column of moving jihadists," Maganawe said.

The Togolese armed forces expressed "their deep regret at this tragedy", and renewed "their sincere condolences to the grieving families" and wished a speedy recovery to the injured.

General Maganawe added that the armed forces "will do everything in their power to prevent this kind of tragedy from happening in the future.

Last month, Togo declared a state of emergency in its northern prefectures because of the threat of Islamist attacks. Eight Togolese soldiers were killed in May in an attack in the region. 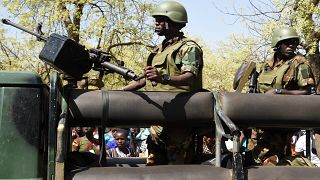