4 days after Mali arrested 49 Ivorian soldiers on its soil, the mandate of the troops remains unclear despite the numerous versions presented.

The Chief of Staff of the Armed Forces of Ivory Coast insisted Wednesday, the menwere part of MINUSMA, the UN peacekeeping force in Mali, rebutting a comment by the deputy spokesman for the UN Secretary General.

"In order to support its two contingents that are in the Minusma, the Mopti company and the Timbuktu battalion, Ivory Coast needed, after receiving the UN's authorisation and following a memorandum of understanding with the company SAS (Sahelian Aviation Services), to install an National Support Element in Bamako, the capital, as a forward logistic base", colonel Armand Mahi Guezoa, External Operational Advisor to the Chief of Staff of the Armed Forces of Ivory Coast said before the press.

Part of the United Nations Integrated Stabilization Mission in Mali?

According to a statement from the Ivory Coast government issued Tuesday, the soldiers operate "under an agreement signed in July 2019 between Ivory Coast and the United Nations, and in accordance with a security and logistical support contract signed with the Société Sahel Aviation Service (SAS)". The release also read that since that date, "7 contingents have taken turns periodically on this site, without any difficulty." However, the UN deputy spokesperson, Farhan Haq, was not so adament. Speaking during a press conference on July, 12, he said: "These are not UN peacekeeping troops, so they're not part of MINUSMA [United Nations Integrated Stabilization Mission in Mali] formerly. They are National Support Elements who are deployed bilaterally by the troop-contributing countries in support of their contingents[...]"

So far, the Malian government considers them mercenaries which embarked "with weapons of war".

If Mali's government said it intends to prosecute the 49 soldiers, officials in Abidjan called on Mali to immediately release them.

Following the incident, Mali decided to end the protection activity of the Sahelian Aviation Services by foreign forces. and demanded their departure from Malian territory. 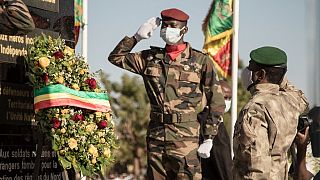