Sudan's main civilian bloc, Forces for Freedom and Change (FFC), rejected a proposal by the country's coup leader to make way for a civilian government as a "giant ruse" and urged more protests.

The rejection was announced on Tuesday after a surprise move by the army on Monday to "make room" for civilian groups to form a new transitional government.

"This speech is vague, full of double meanings, (Army chief Abdel Fattah al-Burhan, ed.) says that he wants the military to return to their barracks. But at the same time, he wants to take the civilian power to the barracks, and this is a way to reinforce his control, even more than before. So we totally refuse this proposal, we maintain that we want the end of the coup and the installation of an entirely civilian power", said Omar el-Degeir, executive of the civilian bloc of the Forces for Freedom and Change (FFC).

On the streets of Khartoum, protesters defied security forces and held firm on their makeshift barricades, despite heavy fatalities late last week.

The FFC has so far refused to take part in talks with military leaders, despite pressure from international brokers that range from the United Nations to the African Union and regional bloc IGAD.

"These are just words, it is he (Burhane, editor's note) who made the street explode. It was right after his speech that the whole of Khartoum exploded, the youth blocked all the streets, the people came out even more. In addition to the sit-ins in Khartoum, Omdourman and Khartoum-North, other sit-ins were set up in the provinces" denounced a protester who refused to be identified.

Another demonstrator added "they have not been able to agree on this for three years, so why would they agree overnight or after three or six months. This is a way for Burhane to stay in power forever".

Protests also spread to other cities Tuesday, including Wad Madani, 200 kilometres south of the capital, where hundreds staged a sit-in, according to witnesses. 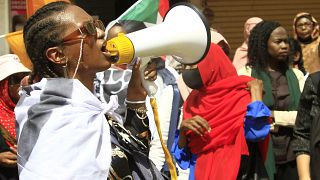