A group of young people, mostly teenagers, were found dead in a tavern and still no explanation ten days later: South Africa gathered Wednesday in a ceremony to salute their memory, in the presence of symbolic empty coffins.

More than a thousand people, including President Cyril Ramaphosa and many elected officials, attended the service held in the township of Scenery Park, near East London (southeast).

Groups of mourners filled a large marquee where about 20 coffins were laid out with a bouquet of flowers on each, and hundreds more gathered outside to watch the ceremony on screens, according to AFP on the scene.

Amid the weeping and prayers, a police band played the national anthem. Most of the funerals will take place in the next few days, according to several families.

"As a nation, we are hurt by what happened," said regional leader Oscar Mabuyane. "The young people we are burying were the hope of their families and the hope of our country."

At dawn on Sunday, June 26, their bodies, which showed no signs of injury, were found inside an informal bar in this poor suburb. Survivors described a struggle to escape the crowded place and a suffocating smell.

But authorities ruled out a fatal stampede. The police investigation is ongoing and autopsy results have not been released at this time.

"We still don't know what killed our children," President Ramaphosa said. "Families need answers, they want to know what happened to their children," he added in a harsh speech about the ravages of alcohol among South Africa's youth.

Of the dead, the youngest was 14 years old, the oldest only 20, according to the dates of birth on the official program of the ceremony. 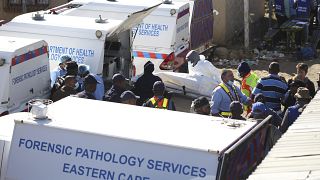