Maasai pastoralists from northern Tanzania were taken to the town of Arusha to appear in court.On Thursday, They were charged with the murder of a police officer during a demonstration early june in the district of Ngorongoro.

The prosecutors increased the number of accused to 25 and added conspiracy to the charges.

The pastoralists and rights groups have accused the government of trying to force them off their land in Ngorongoro.

The clashes erupted on June 10 in Loliondo in the district of Ngorongoro, when Maasai herders protested against a government push to reserve 1,500 square kilometres (580 square miles) of land to create a wildlife protection area. A policeman was killed and several protesters injured.

The court case was adjourned to July 14 as investigations continue.

The pastoralists and some local lawmakers believe the demarcation will leave herders with access to 2,500 square kilometres out of 4,000 and reduce grazing land in Loliondo.

Last week the government warned it would tackle "illegal immigrants" in Loliondo, accusing Kenyan Maasai pastoralists of driving their livestock across the border in support of the Maasai in Tanzania.

The East African country has historically allowed native communities such as the Maasai to live within some national parks, including the Ngorongoro conservation area, a UNESCO World Heritage site.

But the government is now trying to relocating the Maasai pastoralists from the Ngorongoro reserve, as the authorities contend that their growing population is encroaching on wildlife habitat.

Mid-June, footage emerged in northern Tanzania of what appears to be members from the Maasai community being removed from the land surrounding their village. 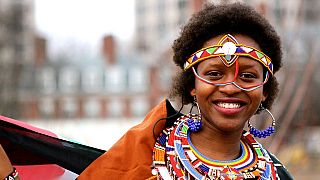 Focus on the Maasai culture and their beauty accessories

Focus on the Maasai culture and their beauty accessories