At least 79 people died in an attack by suspected jihadists on Saturday night in the northern Burkina Faso town of Seytenga, according to a new government report Tuesday.

"Twenty-nine new bodies have been found. This figure is in addition to the fifty or so lifeless bodies already found, bringing the provisional death toll from the killings to 79," said a government statement, which said the search was continuing.

According to a presidential decree, the national mourning began Tuesday at midnight and will end at the same time on Thursday night.

It is "observed throughout the national territory, in memory of the victims of the attack perpetrated by unidentified armed individuals against the town of Seytenga, in the province of Séno, Sahel region, during the night of June 11 to 12," the text said.

"During this period, flags will be flown at half-mast on all public buildings and in Burkina Faso's representations abroad," the decree said, adding that "popular celebrations and recreational events are prohibited.

According to the European Union, which condemned the attack, the death toll could reach 100.

"The process used by the terrorist group that carried out the attack, namely the systematic execution of anyone encountered in the village, is appalling," said the head of European diplomacy Josep Borrell in a statement.

Seytenga had already been hit on Thursday by a jihadist attack that killed eleven gendarmes.

The Burkinabe army had announced that it had killed about 40 jihadists following that attack.

The weekend killings "are reprisals for the actions of the army, which have bled the jihadist groups," said government spokesman Lionel Bilgo.

After Lieutenant Colonel Damiba came to power and overthrew President Roch Marc Christian Kaboré, who was accused of ineffectiveness against insecurity, attacks by these movements affiliated with al-Qaeda and the Islamic State had stalled.

But they have resumed and killed nearly 300 civilians and soldiers in the past three months.

The north and east of the country, bordering Mali and Niger, are the regions most affected by jihadist violence.

Since 2015, attacks attributed to jihadists have killed more than 2,000 people and displaced nearly two million in Burkina Faso. 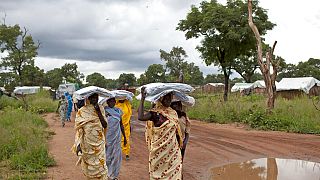