Belgium's King Philippe on Wednesday expressed his “deepest regrets” for his nation's abuses in its former colony, the Democratic Republic of Congo.

During a speech on his first official trip to the country, he said that Belgian colonial rule had been unjustifiable and racist.

His speech came two years after he made similar comments on the 60th anniversary of Congo’s independence.

Then, he went further than any of his predecessors in condemning “acts of violence and cruelty” during Belgian colonial rule.

Belgium has faced a reckoning over its colonial past in recent years, particularly around the commemoration of Congo's 60th anniversary of independence in 2020.

That year Belgium took down a statue of King Leopold II, who plundered Congo during his 1865-1909 reign and forced many of its people into slavery to extract resources for his own profit.

The early years after Leopold laid claim to the African country are especially infamous for killings, forced labor and other forms of brutality.

Some experts estimate that as many as 10 million Congolese died.

After Leopold’s claimed ownership of Congo ended in 1908, he handed it over to the Belgian state, which continued to rule the colony until the African nation became independent in 1960. 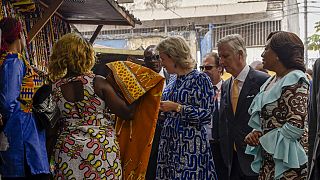