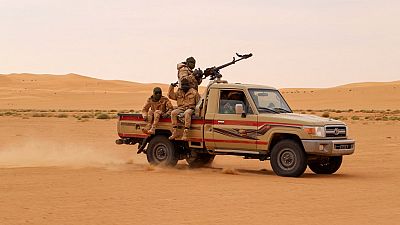 Some 40 Boko Haram jihadists were killed on Tuesday night by the Nigerien army on an island in Lake Chad, on the borders of Nigeria, Niger, Cameroon and Chad.

"In the night of 24 to 25 May, a hundred Boko Haram fighters aboard four large dugout canoes and an armed boat, attempted an action in force against our elements on the islands of Lake Chad," said a statement from the Ministry of Defence.

It said that "the energetic reaction of the latter forced the assailants to flee with several deaths in their ranks. A "combing mission" in the area "allowed the neutralisation of about forty fighters" and several weapons, ammunition and explosives, as well as "various military materials" were recovered.

In addition, seven Nigerien soldiers were injured when their vehicle "on a reconnaissance mission on the outskirts of Lake Chad" jumped on an improvised explosive device (IED), the ministry said, but did not specify the date of the accident.

It assures that "the troops engaged in Operation Lake Sanity (Operation Lake Integrity) continue to control the enemy zones conquered on the islands of Lake Chad.

The Chadian, Cameroonian, Nigerian and Nigerian troops of the Joint Military Force (JFM) launched in March a new coordinated offensive in the four countries, called Operation Lake Integrity, whose objective is to "completely destroy Boko Haram and other terrorist groups that are scouring the Lake Chad Basin", a senior official of the JFM, whose headquarters is based in N'Djamena, explained in early May.

Some 20 jihadists were killed in early May by elements of this operation. To combat the jihadists, the armies of the four countries, as well as that of Benin, reactivated 2015 the MMF, which was created in 1994 but has been very little operational since.

The Lake Chad Basin, which stretches along the shores of the four countries, is a vast expanse of water and swamp where the jihadist groups Boko Haram and Islamic State in West Africa (Iswap) have set up hideouts in the countless islets that dot the basin.

The Boko Haram insurgency emerged in 2009 in Nigeria and then spread to neighbouring countries. Since then, more than 36,000 people (mainly in Nigeria) have been killed, and 3 million have been forced to flee their homes, according to the UN.