Shortly after Hassan Sheikh Mohamud was inaugurated as president of Somalia Monday, the UN envoy for the country hailed the peaceful transfer of power.

"**Outgoing President Mohamed Abdillahi Mohamed Farmajo graciously conceded and congratulated and extended support to his successor,**James Swan, the Special representative of the Secretary-General and Head of the UN Assistance Mission in Somalia told the U.N. Security Council. The new President was immediately sworn in and the outcome has been fully accepted. As this Council has noted repeatedly, Madame President, it is past time for Somali leaders to move beyond the prolonged political contest to focus on urgent national priorities."

The election of Mohamud ended a long-delayed electoral process which saw concerns and insecurity increase after his pri'decessor's mandate expired without a successor in place.

The envoy met with the new president after his May 15 election to hear about his goals which included ending constitutional review and judicial reforms as well as giving urgent attention to the "drought".

African Union special representative, Francisco Madeira, told the council that in his electoral manifesto, Somalia's new president "placed emphasis on liberating the country from al-Shabab," opening up the main supply routes, and ensuring that the security forces do not interfere in politics.

The peaceful transfer of power creates conditions for advancing a national political dialogue and deepening reconciliation, Madeira said in a video briefing. He added that he was pleased the new administration is already engaging regional leaders on critical national issues.

With a newly elected parliament and president, Madeira said, "the doors are now open for a new chapter in the history of Somalia to be written." 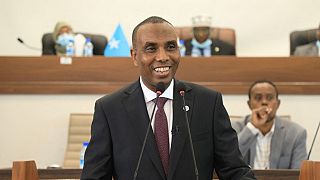