26 artists from Benin and abroad are taking part in the 8th edition of the Effet Graff, a graffiti festival. Bearing in mind this year’s theme is "New Benin", they empty their spray cans to decorate this 1,300 meter wall in Cotonou. The colorful mural features different art forms such as paintings and graffiti and tells Benin’s history.

"We not only have graffiti artists but we also have visual artists who have joined the festival and it's a moment for sharing, at the same time it is a moment of discovery for people", Drusille Fagnibo, Beninese artist tells hapilly.

Many of the artists have chosen to represent the national treasures recently returned to the West African country by France. The artefacts are providentially on display at the presidential palace a few hundred metres from the mural. A chance for passer-by who pause to admire the graffiti.

"**When I arrived at the port I saw it (the mural),**Achirou Mamadou Soumaïla a Cotonou resident says.I like it very much! The country has changed at the same time."

Beninese artist Romario Agbo-Koffi analyses what is so captivating:"The need to consume art is there and people stop, a passerby who hadn't expected to see it will stop. Here we are at a traffic light at the Hôtel du Port but look, when people stop, when the traffic light turns green, they don't move right away because they see the art and are immersed."

The mural depicts modern Dahomey amazons and recent achievements in the country. Yet, it also doesn't conceal the hardships. The special court Criet, which is criticized by some opponents for being a political weapon, is represented as well.

“Graffiti has this particularity of reaching people the most, it's a great vector of communication so we're using this medium to raise awareness, to bring us back to our roots, and reconnect with our history and our identity. No one can promote our story better than us”, Laurenson Djihouéssi/ 'Mr Stone', grafitti artist and festival promoter says.

The Royal Statue depicting King Gele as a half man, half lion creature and other art pieces already spread across 700 meters on the wall. They give an overview of the history of Benin. Artists now hope to set a record for the largest mural fresco in the world. 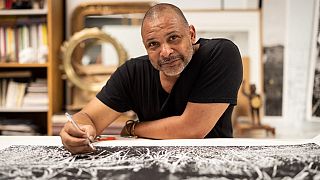 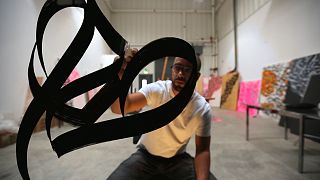