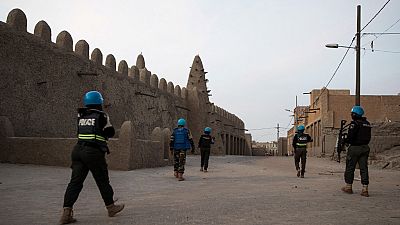 The Malian army has prevented the United Nation's mission in Mali from patrolling Djenne, in the centre of the country, a hotbed of violence and jihadist activity.

This is the latest hitch in the UNMIS operation. It came just weeks before the UN debate on the renewal of the UNMIS mandate in June. Restrictions imposed on UNMISMA by the Malian authorities are shaping up to be part of the debate.

A Malian military official in the region spoke of a simple postponement, which he blamed on concurrent military activities and on UNMISMA itself.

Minusma had not experienced any hindrance to its patrols in Djenné before Mali turned in recent months to Russia for support in the anti-jihadist fight, and turned away from France and its European allies, a security official said.

The Minusma regularly conducts patrols in Djenné and other localities, encouraging the holding of markets in populations reassured by their presence.

"Unfortunately, the patrol that was planned for Monday 16 May by the UN police was refused on the grounds that military operations are underway in the area," said UNMIS spokesman Olivier Salgado, confirming a report by Radio France Internationale (RFI).

Asked about a possible Russian presence that day in Djenné, Olivier Salgado simply recalled the official line of the authorities. They say they have state-to-state cooperation with Russia and receive support from Russian army instructors.

France and its allies claim that the junta has secured the services of the controversial Russian private company Wagner. The use of Wagner was one of the reasons given by France and its allies for announcing their military withdrawal from Mali in February. They also argued that there were "multiple obstructions" from Mali.

"We respect the sovereignty of Mali, which has the freedom to choose its bilateral partners," said Salgado. "However, this cooperation must allow us to continue our partnership with the Malian army," he added.

Colonel Karim Traoré, zone commander of the Mopti military region where Djenne is located, denied any obstruction. He cited ongoing military operations in the area. He also argued that UNMIS had changed the nature of the planned mission between two requests.

"The patrol was postponed but the patrol was not refused," he told AFP. He added that UNMIS had since requested and received permission for a mission to Ogossagou.

The inability of the UN mission to patrol Djenne comes on top of the junta's establishment of a vast no-fly zone in which the UN force cannot fly without asking permission and with advance notice complicating its operations.

"Since the beginning of the year, we have had restrictions imposed on us from time to time and we regret this. For the most part, our operations continue in a normal way," Salgado said.

The UN Mission in Mali is still waiting for permission to send its experts to Moura, the scene in April of what Human Rights Watch describes as the massacre of 300 civilians by Malian soldiers associated with foreign, possibly Russian, fighters. The Malian army denies this and claims the elimination of more than 200 jihadists.