The UN Assistant Secretary-General for Africa told the Security Council that terrorism and insecurity continue to spread in the Sahel, devastating the lives of millions of people.

Martha Ama Akyaa Pobee said that “civilians are often the main victims of terrorist acts” and “the suffering and loss suffered by civilian populations at the hands of terrorist groups are indescribable.”

According to the UN official, “future generations also pay the price.”“Now more than ever, Pobee said, countries in the region need to step up efforts to uphold and protect human rights.

“Uprooting terrorist groups, who are often deeply enmeshed or embedded within communities is uniquely challenging in the Sahel and has rendered counter terrorism operations immensely difficult to carry out. But if civilians fall victim to such operations, those very efforts are going to be pointless,” she added.

In the coming months, the Assistant Secretary-General said “it will be crucial for stakeholders in the region to come to a consensus on how to best bring the transitions in Mali and Burkina Faso to a swift conclusion, and in a manner that addresses the grievances of the populations in each country.”

From the civil society, the Coordinator and President of the Rights and Resources Initiative/Group, Solange Bandiaky-Badji, briefed the Council Members about how climate change impacts conflict dynamics in vulnerable countries.

According to Bandiaky-Badji, not considering these dynamics “could result in an incomplete and flawed analysis”, because “climate change affects the availability, distribution, and quality of natural resources, which can escalate conflicts over those resources.”

The leader of the Rights and Resources Initiative/Group also said that “stability will only be achieved if foreign and national governments can move beyond counter-terrorism and divert a greater share of resources toward reconciliation, dialogue and tangibly improving vulnerable people’s livelihoods.” 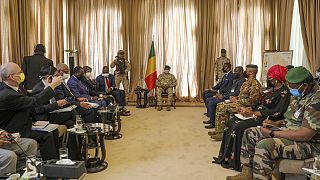