Namibian political activist Michael Amushelelo handed himself over to the police on Friday, May 13. The 31 year-old was being hunted down for “terrorising the business community” after he raided shops in Windhoek's China Town.

Amushelelo is a member of the political party Namibia Economic Freedom fighters (NEFF).

His action conducted without a court order or mandate came after the Namibia Revenue Agency destroyed over N$5 million (almost 3 million euros) worth of goods sold by locals. The nation's tax collecting authority considered them to have been imported illegally.

The red beret activist has been filming and publishing on social media his operations which have been widely commented and shared. 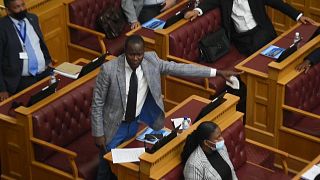