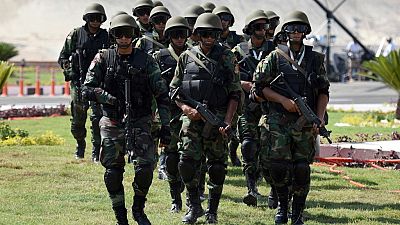 Eleven Egyptian soldiers were killed on Saturday attempting to prevent a "terrorist" attack on the Suez Canal zone abutting the Sinai peninsula, a hotbed of jihadist activity, the army said.

The death toll is one of the highest recorded by Egyptian forces in years in Egypt.

According to the military statement, "A group of takfiris launched an attack on a military water pumping station.”

The soldiers "repelled them and fighting ensued in which eleven soldiers were killed and five wounded," the statement said.

The soldiers "continue to pursue the terrorists" to "a remote area of Sinai", according to the same source.

The term "takfiris" is generally used to refer to Sunni jihadist or radical Islamist groups.

President Abdel Fattah al-Sissi said on Facebook that "these terrorist operations will not overcome the determination of the country and its army to cut the evil of terrorism at its roots".

Washington condemned a "terrorist attack". "For decades, the United States has been and remains a strong partner with Egypt in the fight against terrorism in the region," State Department spokesperson Ned Price said in a statement.

The army and police launched a major "counter-terrorism" operation in February 2018 in the Sinai Peninsula, where radical cells, some of which have pledged allegiance to the jihadist group Islamic State (EI), are rife.