Al-Shabaab jihadists armed with guns and explosives stormed an African Union base in Somalia on Tuesday, triggering a fierce firefight that killed Burundian peacekeepers.

A high-ranking Burundian military officer said about 30 soldiers were killed and another 22 wounded, while a dozen were missing.

It was the first such attack on a peacekeeping base since the AU Transition Mission in Somalia (ATMIS) replaced the previous AMISOM peacekeeping force on April 1.

Al-Shabaab, which has been waging a deadly insurgency against Somalia's fragile central government for more than a decade, claimed responsibility, saying it had taken control of the camp and claimed to have killed 173 soldiers.

Somalia's government said it "condemns the attack targeting ATMIS" and appealed to the international community to do more to support Somali forces and ATMIS "in effectively combatting terrorism".

ATMIS -- made up of troops from Burundi, Djibouti, Ethiopia, Kenya and Uganda -- is tasked with helping Somali forces take primary responsibility for security in a country that has been mired in conflict since 1991.

The attack highlights the ongoing security woes in the troubled Horn of Africa country, which is also embroiled in a deep political crisis over delayed elections and faces the threat of famine. 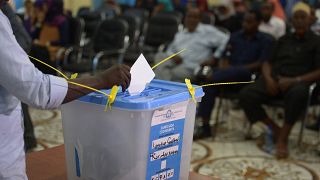