Shasha, is a village located in the Masisi territory, about thirty kilometers southwest of the city of Goma, capital of North Kivu in the eastern Democratic Republic of Congo.

Farming remains one of the main activities of the local population here, but in many fields the land is becoming less and less arable.

The situation has led to a decline in local production, which can no longer cover local food needs, whereas in the past, the village used to supply large cities such as Goma with basic necessities.

To overcome this problem, many field owners resort to buying human urine from neighbours or other inhabitants of the village, which they then use as organic fertilizer.

Paul Kanyama, is a farmer and one of the initiators of this solution (human urine) in Shasha.

"We start by placing plant-bands in our fields that we then spray with human urine, which after a month's conservation has the capacity to kill any insect that may attack the plant. Afterwards, we put our seeds in our fields before a second spraying. It is a method that works perfectly well and thanks to which the production of our fields increases again" Kanyama told our correspondent.

Indeed this is a solution that residents here say works very well and increases the production in some fields of the inhabitants of the village.

Souzana RUPIYA, is one of the farmers in Shasha. "Before, and during the harvest, my field produced two and a half bags of dry beans. During the last harvest, I got only one bag. Afterwards, I started to apply this alternative of human urine and little by little I can now see its results".

While for the farmers, this practice increases the productivity of their fields, for the other young people of Shasha, it is a way to make some money by selling a 20-liter can of urine for 12,000 Congolese francs, or 6 American dollars.

Kahindo Lubuto Mwajuma, is one of the young persons in the village trading in the supply of urine to farmers.

"Me and my friends were sensitized by some members of the ACTION FOR THE DEFENSE OF HUMAN RIGHTS (ADPDH)" she says**. "They asked us to provide them with urine cans that they would use to fertilize their fields in exchange for a sum of 12,000 Congolese francs. This is something I have been doing for some time and I have just done it today"**

Following a strong demand from farmers who, due to lack of access to organic fertilizer, resort to this alternative, this human urine is becoming scarce and its price is likely to rise in the coming days.

The DRC's agricultural sector employs over 60 percent of Congolese labour and comprises 19.7 percent of GDP, according to the International Trade Administration ITA. 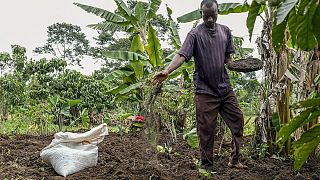