For some he is a "township hero". For others, he is the activist disrupting the peace of the nation and that needs to be stopped. A black boy from Soweto, Nhlanhla Lux Mohlauli, now 35 years old, is the face of a controversial anti-migrant movement which, in the space of a few months, has gained in power in South Africa.

In early January, the Operation Dudula movement, which means "to turn back" in Zulu, appeared in a country that is occasionally plagued by xenophobic outbreaks.

The demonstrations quickly gathered a few thousand followers in Johannesburg, almost exclusively black crowds, angry at the lack of resources and unemployment: "foreigners are stealing the work of South Africans," they proclaimed.

Invariably dressed in fatigues and a bulletproof vest, Nhlanhla Lux is at the forefront with shocking statements about the illegal migrants who "occupy" the country.

On the top floor of his house in Soweto, he makes phone calls. Tall, well-groomed, he is accompanied by a handful of supporters who seem to have their habits in the premises equipped with a gym, a sauna and somewhere, he says, a cache of weapons.

"The objective is simple: to fight against criminals in our communities. And it turns out that the majority of the problems come from illegal aliens," he says in an interview with AFP.

There are nearly four million foreigners in the country, according to official statistics. The continent's leading industrial power struggles with an unemployment rate of 35%, but attracts many African migrants.

Last month, the man described by some as a "charismatic leader" was arrested for trespassing. One of the tactics of the movement is to organize raids, based on denunciations, on the homes of people suspected of theft or drug trafficking.

The exchanges are done by messaging in private groups of several hundred members who greet each other in military terms.

Nhlanhla Lux denies that he wants to take justice into his own hands, but he says he conducts these operations in cooperation with the police.

"The police are calling on anyone with information about criminal acts," the latter tells AFP. "We will not confirm any identity of those who provide information because we guarantee confidentiality."

In early April, a man was killed in a township north of Johannesburg. That night, men banged on doors, demanding to be shown papers, police said. Elvis Nyathi, a 44-year-old Zimbabwean, tried to flee. He was burned alive.

Two weeks later, during an action with members of Operation Dudula against cable theft, a shootout broke out: one dead, six wounded.

"All the victims are believed to be South Africans. The nationality of the suspected shooters has not yet been determined because they did not have identification," police said.

"We were ambushed by foreigners in South Africa," thunders Nhlanhla Lux, marking every syllable.

His recent popularity was born during the unprecedented wave of looting and rioting that ignited the country in July, killing more than 350 people. His call to protect the Soweto shopping mall made the rounds on social media.

Born just before the end of apartheid in 1991 into a modest background, his mother, a cleaner in white-owned stores, dreamed of another life for him and arranged for him to attend the same "rich schools" as the children of his employers.

"I would see kids with boxes of lunches that were much bigger and healthier than what my family could eat," he recalls of sleeping on the kitchen floor.

Thanks to sports and scholarships, he continued on to college and entered the lucrative golf business. He says he earned enough back then that he is not "trapped" in a job today.

"Nhlanhla is saying what we want to hear, we need someone who has the courage to say 'Close the borders'," says Thabang Moloi, 54, a loyalist.

President Cyril Ramaphosa recently warned against methods similar to those used under apartheid. 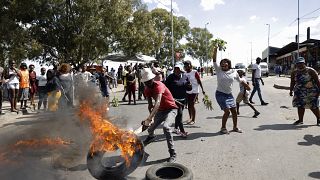 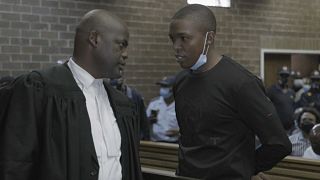 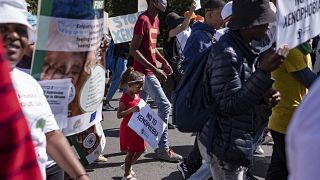