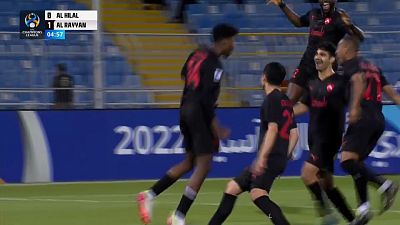 Al Rayyan SC of Qatar defeated defending champions Al-Hilal Saudi 2-0 in their final Group A match in the ACL Champions League in Riyadh on Wednesday.

Both sides had already booked their spot in the knockout stages, but the visitors could clinch the top spot in the group if they beat the Saudi Arabian side by more than three goals.

An own goal from Hyun-Soo Jang in the 5th minute, followed by a Yohan Boli strike two minutes before half time made that a real possibility as Al Rayyan took a 2-0 lead.

Boli nearly grabbed a second in the final seconds of the first half, but his header came back off the top of the crossbar.

The hosts improved in the second half and were awarded a penalty when Moussa Marega was tripped in the box by Dame Traore in the 73rd minute.

However, Salem Al Dawsari's low spot-kick was saved by goalkeeper Fahad Baker as the match finished 2-0 to the visitors, confirming Al-Hilal Saudi FC as Group A winners and Al Rayyan as runners-up.