The newly elected Somali parliament convened for the first time Saturday with new legislators sworn in. The session set the ball rolling for the election of the next president.

The parliamentary elections should have been completed before incumbent President Mohamed's term expired in February 2021.

Elections in Somalia follow an indirect model, whereby state legislatures and clan delegates pick lawmakers for the parliament, who in turn choose the president.

The process being more than a year behind schedule, the interim speaker called for a speedy completion of the work: "One of our first duties that we should perform quickly is to work on electing the new speaker and his two deputies, Abdisalam Haji Ahmed Liban said. Adding: "Today, we chose a 10-member committee..."

298 legislators have taken the oath of office, from a possible 329 members for both houses. If seats still remain unfilled but sufficient lawmakers have been sworn in to move the election process forward.

Political infighting stymied the process and the president's mandate expiring without a vote taking place had add to the tension in the country.

President Mohamed, better known as Farmajo, tried to extend his rule by decree but faced protests and violent opposition in Mogadishu, where rival political factions fought on the streets.

A date for choosing the new president has not been set. 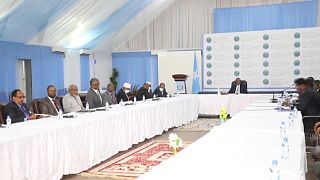