Durban residents came out together with lifeguards to clean up the beach after the recent storms and floods. Tourists came from across the country for the Easter break, hoping to swim and enjoy the beach, but were disappointment when they saw the devastated seaside.

In South Africa’s port city of Durban two races against time have started. On the inland front rescue operations continue and on the shorefront, scores of volunteers are picking up debris and broken reeds.

A trail of destruction was left on the famous Umhlanga beach. Adults and children are now trying to clean up ahead of an expected surge of Easter holidaymakers.

"My kids surf here, like every weekend and so it's heartbreaking to see the beach like this", Siduduzo Wagner a Durban resident says.

With hand gloves on, workers and volunteers rummage through the jumbled piles. They can find brooms, mops and even household utensils, which they sort out so that debris don’t add up to ocean pollution.

"It's a mammoth task, Troy Brown, the chairman of the Durban surf lifeguards Club concedes. It's a long way to go. But as you can see, while the number of people we have around us here have all banded together, this is just one beach of three other beach cleanups going on concurrently."

Umhlanga beach normally attracts surfers and tourists thanks to its warm Indian Ocean waters. But before they can return, volunteers continue to fill up numerous trash bags.

Therefore, despite the size of the task, it was important for Tim White, a member of the Durban surf Lifeguards club, to be present: "We've got such devastation with plastics and that in our oceans ; we're basically killing our oceans. And if we don't look after the oceans, we won't have a beach to appreciate in future years to come. And neither will our children. So it's important that people are educated to get the plastics out of the beach, stop the microplastics in the sea and the pollution that's killing off our oceans."

The floods will impact Kwazulu-Natal's economy which performs in sectors such as tourism, manufacturing and agriculture. 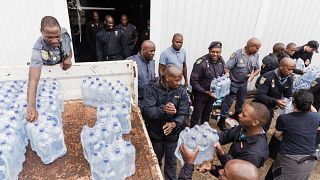 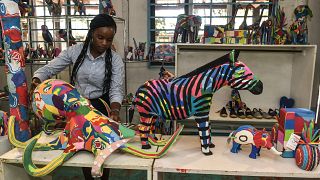