Curly hair makes a come back in Egypt

In Egypt natural curls were considered "Shaggy," "messy,"and "unprofessional." They were once looked down upon in favor of Western beauty with sleek, straight locks.

For Rola Amer and Sara Safwat, their curls were once a career-hindering nuisance. Now part of an aesthetic liberation movement sweeping Egypt in recent years, they own a curly hair salon that caters for women and men like them, and now, thanks to social media, it is cool to have curly hair in Cairo again.

Doaa Gawish, has seen how other cultures have impacted what is considered beautiful and acceptable in Egypt and how that has changed in the rencent years."I think we are strongly affected by the western standards of beauty. In the past, people in Egypt rejected their curly hair. But recently, following the "Heat-free challenge" movement, people started accepting their natural hair. Also, today's young girls are going against the rules set by the old generations, allowing the growth of the natural hair movement," said the founder of Facebook group called Hair Adict.

Black women in the United States were increasingly embracing their curls in a natural hair care movement. Many of the biggest brands built by Black women at the time would eventually find their way onto the shelves of curly salons in Cairo.

"In the past, the only girls who were considered beautiful were the ones with straight hair. Now, we accept our natural hair, more than before," said Amany Mostafa, an Egyptian resident.

Mariam Ashraf, a teacher and a natural hair influencer has seen the market's potential firsthand. Only a hobby at first, her Instagram videos quickly became "a real source of income." "My content focuses on helping girls get to know their natural hair, understand it, and love it. I make videos on how we can look after our hair," she said.

Since he inadvertently discovered his curls during Covid-19 lockdown, cybersecurity expert Omar Rahim has been gladly paying to maintain his style."Some of my friends make fun of me, they mock me because I am a guy and I take care of my hair, but I don't care, because it's a nice thing to take care of your looks, and having curly hair is an asset," he said.

While the average monthly income in Egypt is 6,000 pounds ($325), a haircut at the Curly Studio can cost up to one-tenth of that. 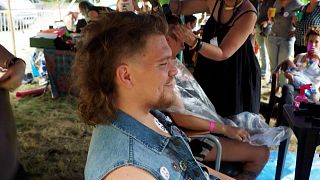