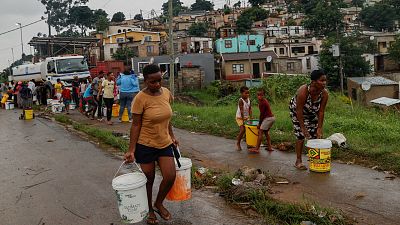 President Cyril Ramaphosa has called it "a catastrophe of enormous proportions" .

South Africa's leader was visiting survivors in one of the townships in the city of Durban which has been struck by floods and mudslides stoked by record rains.

At least 300 people have died after roads and hillsides were washed away and homes collapsed. The search for missing persons is still going on and the death toll is expected to rise. One family is said to have lost 10 members in the devastating floods.

Residents had to flee their homes but road infrastructure has been severely damaged.

The whole of KwaZulu-Natal province which which includes Durban has been declared a disaster area.

Climate change is being blamed for the heaviest rains in 60 years.

South Africa’s neighbours suffer such natural disasters from tropical storms almost every year, but Africa’s most industrialised country is largely shielded from the storms that form over the Indian Ocean.

More rains are forecast over the weekend. 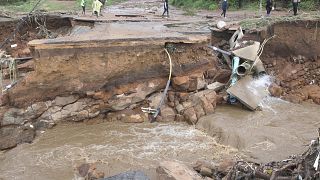