On an island on Lake Kivu in the eastern Democratic Republic of Congo row after row of coffee bushes are bringing forth a rich harvest of berries.

And the main beneficiaries will be women, the outcome of an equity project in a sector where women are notoriously sidelined and under-paid.

"Women are the ones who work the land, but when it comes to harvesting (the crop) and marketing (it), they get pushed aside -- it becomes a man's business," said Marcelline Budza, a 33-year-old entrepreneur.

"That was what disgusted me."

Nine years ago, Budza founded an NGO called Rebuild Women's Hope (RWH) to expand the role of women in the Democratic Republic of Congo's coffee sector.

RWH set its eyes on Idjwi, an island of some 300 square kilometres located in the middle of Lake Kivu, where some of the world's most-lauded coffee is grown.

Arabica coffee from Idjwi has a worldwide reputation due to its richness that comes from being grown at a high altitude, in dark volcanic soil and without chemical fertilisers.

"It's exceptional," said Daniel Abamungu Cinyabuguma, manager of the Muungano agricultural cooperative in Goma, on the shore of the great lake.

The berries are picked, washed and sorted before being allowed to ferment and then dry. It's labour-intensive work that in the DRC has long been dominated by men.

"Men denigrate the women, saying that coffee growing isn't for them," Budza said.

"Overcoming prejudice, red tape, tax demands, fraud and lack of credit has taken years of effort, which are now being rewarded," she said.

Today, RWH employs at least 12,000 women at the peak of the coffee-harvesting season.

The women chiefly work in processing the coffee and in office administration and are paid at the same rate as the nearly 900 men.

"My goals are being achieved," said Budza. "Women can now smile, they can be financially independent."

Even so, she said, "I have enough money to buy a goat, a chicken... I send my children to school, I buy them clothes."

RWH produces between six and 10 containers of coffee per harvest, each holding 19 tonnes of coffee. The coffee comes from its own fields, but also from a number of small producers.

"Our coffee is consumed in the United States, Europe and Asia. We have really good results," said Budza.

"We hope to expand and reach 20 containers (per harvest), using only local labour." 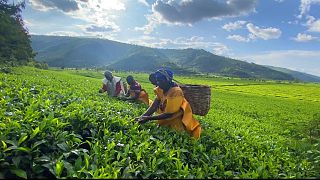