The Somali region of Somaliland launched an international appeal on Wednesday for $2 billion to urgently deliver humanitarian and livelihood support.

The appeal comes after a huge fire destroyed the main market in the capital Hargeisa, wiping out t an estimated 5,000 small, medium and large family businesses and therefore devastating the local economy.

Somaliland President Muse Bihi Abdi said in a statement that the fire had caused losses estimated at $2 billion, or around 60 percent of countrz 's gross domestic product.

Its GDP in 2020 was just over $2.9 billion, shrinking 3.1 percent from the previous year largely because of the impact of the Covid-19 pandemic, according to official figures.

Somaliland declared independence from Somalia in 1991 but the move has not been recognised by the international community, leaving the region of about four million people

The breakaway region has however remained relatively stable while Somalia has been wracked by decades of political violence and an Islamist insurgency.

An investigation team is looking into the cause of the fire and its report is expected to be disclosed to the media in the next few days, he further said 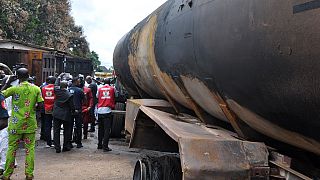