Sankara trial: verdict due after six months of hearing

**Former president Compaoré was sentenced to life in prison over Sankara murder on Wenesday. The verdict comes 6 months after the trial of 14 men accused in the assassination of Burkina Faso's started. A look back at these months of trial.
**

After six months of hearings, marked by suspensions and political twists and turns, the verdict is expected in the trial of the alleged killers of former president Thomas Sankara, killed in 1987.

The landmark trial opened in October 2021, 34 years after Sankara was killed in a coup that brought Blaise Compaoré to power.

Campaoré the main accused, has been in exile in Abidjan since his fall in 2014, did not attend the hearings.

**"It's not fair, it's really not fair that he's not here, Mariam Sankara, widow of Thomas Sankara says. ** He should be here, he should have the courage to be here, but you know, not everybody is brave, they run away from the truth."

Thirty years in prison have been requested against Blaise Compaoré by the military court of Ouagadougou for "attack on state security", "complicity in murder" and " concealing a corpse". Blaise Compaoré is suspected of being the mastermind of the assassination of his former friend and comrade in arms, which he has always denied.

A dozen other defendants attended this lengthy trial, including General Gilbert Diendéré, a former army chief, who is already serving a prison sentence.

Thomas Sankara, who came to power in a coup in 1983, was killed with twelve of his companions by a military commando at the age of 37.

The death of this pan-African icon, who wanted to "decolonise mentalities" and upset the world order by defending the poor and oppressed, was a taboo subject during Blaise Compaoré's 27 years in power. 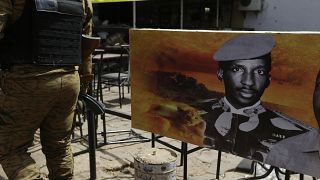