Local sources say fighting between M23 rebels and the national army have resumed in Eastern Democratic Republic of Congo. According to a representative of a civil society group, Kinshasa's military attacked all of the group's positions in Musongati, Tchanzu and Runyoni which are all hills in the Rutshuru territory.

The situation had been calm since last Wednesday. The previous day, eight UN peacekeepers were killed in a helicopter crash while operating in the region. An incident that has not yet been explained.

Last Friday, the rebels declared a ceasefire saying they wished for a peaceful agreement but an official from the local army said with the ennemy on their soil, it was natural to fight back. According to him, fighters of the M23 movement have moved towards the Ugandan border.

Since the beginning of this conflict, thousands of civilians have fled the DRC, a large part seeking refuge in Uganda, reported the UN. 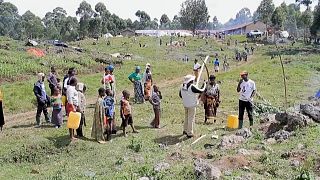