It is the big night for the last ten African nations still in the running to play the World Cup in Qatar. The first leg play-offs will be played this Friday across the continent. Cameroon receives Algeria in Douala with a new coach Rigobert Song and a group almost unchanged from its CAN squad which finished the competition in third place.

"We know that Algeria did not have a good AFCON competition and they want to show something. I think it is not here that they will do that. It is not here. We are ready."

The Fennecs return to Cameroon with their tails between their legs. Fallen from their continental throne, they fear missing a fifth World Cup qualification. Their coach Djamel Belmadi has changed his mind by recalling many nationals as Belfodil or the veteran Guedioura

"We are in 2022, it is necessary one day to turn the page. We remained unbeaten for a long time but one day we had to fall. Cameroon is a great nation of African soccer but we want to go to the World Cup too.

Egypt and its superstar Mo Salah welcome Senegal in Cairo in a remake of the final of the last CAN lost on penalties. First African country to have participated in a World Cup, the Pharaohs intend to take their revenge on the Lions of Teranga and book their ticket to a third world cup.

"We have a high chance of reaching the World Cup. I see that all players are focused, all the players are ready to play the game even tonight instead of tomorrow night, we're all so motivated to play in Qatar and we hope we'll be there."

Senegal captain Kalidou Koulibaly does not want to give in to the euphoria of the continental triumph,

"We know that Salah wants to do well but we also know that Sadio Mane is ready for this match. We are going to approach the match as we did with the (African Cup of Nations) final. We must not focus only on Mohammed Salah but on all Egypt forwards who are all very good. We have to focus on all the players because if we think only about Salah there are other players behind him who can score."

Duel of neighbors in Accra between Ghana and Nigeria. The Black Stars, quarter-finalists of the 2010 World Cup missed the last edition in Russia. A dismal performance in AFCON 2021, - one point in three games, -has deeply annoyed their supporters. Thomas Partey and his teammates have no room for error

The Super Eagles, who have their striker Victor Osimhen back, do not imagine for a second that they will miss their qualification, as they have only missed one World Cup since their first participation in 1994.

In other fixtures, it will be a duel of the Eagles between Mali and Tunisia in Bamako while the Leopards of DRC will challenge the Moroccan Lions in Kinshasa; The dream of a second world cup almost 50 years after the epic of Zaire in Germany remains within reach. 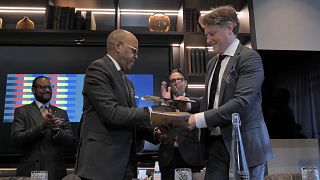