The death toll from twin attacks in central Somalia has climbed to 48, the leader of Hirshabelle state said Thursday, with Al-Shabaab insurgents claiming they were targeting politicians ahead of elections.

The first attack in Hirshabelle's Beledweyne district was carried out on Wednesday night by a suicide bomber, and killed two local lawmakers including Amina Mohamed Abdi and several of her guards as she campaigned for re-election.

Minutes later, a car bomb exploded outside Beledweyne's main hospital where the injured were being taken for treatment, killing dozens, causing buildings to collapse and leaving vehicles in charred, twisted ruins.

"As far as we can confirm, 48 people were killed and 108 others injured in the twin blasts," said Ali Gudlawe Hussein, leader of Hirshabelle state, adding that emergency workers had found bodies buried under debris.

"We are urging (citizens) to be very vigilant, we are ordering all security agencies to beef up security," he said.

Earlier Thursday, the Beledweyne district police chief told AFP that the attacks had killed over 30 people.

"The terrorists carried out the first attack using a suicide bomber and readied a car loaded with explosives in front of a hospital to cause more casualties," said Colonel Isak Ali Abdulle.

"These were devastating simultaneous attacks which damaged property as well as causing mass civilian casualties."

The bombings occurred the same day as three people were killed in a separate attack near Mogadishu's airport that was also claimed by Al-Shabaab.

The Al-Qaeda-linked militants frequently target civilian, military and government targets in Somalia's capital and outside.

Witnesses described carnage outside the hospital in Beledweyne.

"The second blast was very huge, it occurred in front of the hospital and my brother and one of our neighbours were among the dead," said Mahad Yare, a Beledweyne resident.

Al-Shabaab said it carried out the attacks to target politicians contesting ongoing elections.

The British ambassador to Somalia, Katie Foster, shared her condolences on Twitter, saying: "We strongly condemn the use of violence to intimidate and disrupt the elections."

The European Union's ambassador to the country, Tiina Intelmann, also offered condolences, writing on Twitter: "Violence is not a way forward for #Somalia. #EU condemns terrorism and politically motivated killings."

The airport complex houses the United Nations, aid agencies, foreign missions and contractors, and the headquarters of the African Union military mission, AMISOM.

Three people were killed in that attack -- a policeman, an AMISOM soldier and a civilian.

Al-Shabaab has been seeking to overthrow the country's fragile government for over a decade.

The Horn of Africa nation has seen a spate of attacks in recent weeks as it hobbles through a long-delayed election process.

The lower house election is now due to be completed on March 31, paving the way for lawmakers to pick a president.

Somalia's international backers have warned the election delays distract from the fight against Al-Shabaab.

The jihadists controlled Mogadishu until 2011 when they were pushed out by AMISOM troops, but still hold territory in the countryside. 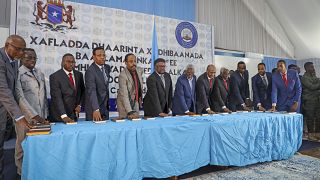