At the southern end of the majestic Lake Kivu, bordered by green hills, a compact sheet of plastic waste is constantly forming, to the point of blocking the turbines of the largest hydroelectric plant in the eastern Democratic Republic of Congo.

The Ruzizi dam attracts like a magnet the thousands of bottles, cans and other garbage thrown into the lake, which stretches some 90 km along the border between the DRC and Rwanda.

"As the lake flows towards the Ruzizi River, little by little all the waste that is thrown in comes to rest here," Liévin Chizungu, head of production at the Ruzizi 1 power station, explained to a team from AFP. Even the waste coming from Goma, to the north of the lake.

The mountainous terrain and rainy climate of the city of Bukavu do not help. "The rainwater carries the waste into the lake and then into the river," explains engineer Jovy Mulemangabo, who is responsible for South Kivu at the national electricity company (Snel).

According to Mr. Chizungu, this waste is piling up in the installations "at a depth of 14 meters". Divers have to clean the bottom of the river to prevent the turbines from being clogged and the towns in the region from being deprived of electricity, he added.

Byunanine Mubalama, on the other hand, clears as best he can on the surface, by boat. "I've been doing this job for 13 years... Every day there is garbage that I have to clean up," he says.

But nothing works. Since the end of January, one of the four units of the power plant, damaged by the waste, has been shut down.

"The impact is enormous, we have a deficit of 6.3 megawatts out of a total of 30 MW that we have to produce, not only for the province of South Kivu, but also for the neighboring province of North Kivu and nearby Burundi," says the production manager.

With a generator failure at the Ruzizi 2 power plant, about 25 km south of Bukavu, also caused by waste, a total of 20 MW is missing from the distribution network, the provincial head of Snel also said.

This leads to "a lot of load shedding in the towns of Bukavu and Uvira", he regrets.

What can be done to remedy the problem? "First of all, raise awareness among the population, tell them that the lake is not the right place to throw away waste", nor "the gullies that end up pouring into it", suggests Liévin Chizungu. The authorities must crack down, according to him, by taking sanctions against "people who throw garbage into the lake".

"Our houses are stuck together on small plots of land, there is no way to manage household waste and I have no choice but to throw it into the Kawa River, which overlooks the lake," said Mathilde Binja, a housewife living near the lake.

Malgache Malyanga, head of the Bukavu Household Waste Management Program (PGDM), says that his organization, among others, "collects and disposes of the city's waste" for $3 to $5 per month per household.

But "is it for lack of means? Or by ignorance? Many inhabitants prefer to throw their garbage on the road at night or in the lake, for those who live near it".

At the head of a private company, Plastycor, and a team of ten people, she is in charge of the valorization of this waste, transformed into "useful and beautiful" objects.

"The work is done by hand", but the ideal would be "to industrialize what we do", underlines the head of the company, who would like to contribute to "a 90% reduction of the pollution of Lake Kivu". 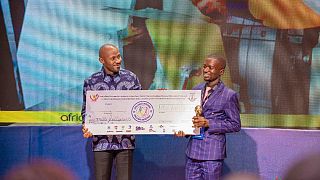