Starting on Monday, the popular means of transportation will only have access to a few areas on Bujumbura’s outskirts. The measure comes after a ban was decided by the Burundian Interior Ministry.

The Burundian Ministry of the Interior and Public Security announced a ban on bicycle taxis, motorbike taxis and tuk-tuks in Bujumbura taking effect on Monday. The popular means of transportation are blamed for the majority of fatal accidents in Burundi's economic capital.

"The measure of respect for the new perimeter prohibiting access to tricycles, motorbikes and bicycle taxis in the centre of the city of Bujumbura comes into effect from Monday 21 March 2022," the ministry said on Twitter on Sunday.

It also warned in a message to opponents of this measure, which has been criticised on social networks and in the independent media, "BEWARE OF THE RECALCITRANTS".

A local administrative source and witnesses told AFP that at dawn on Monday, many armed police were posted on the various roads leading to the forbidden zone.

Until now, these 20,000 two- or three-wheeled vehicles had access to all areas of Bujumbura, the largest city in the country (1.2 million inhabitants), except for the city centre.

The new measure only gives them access to a few areas on the outskirts.

In mid-February, the Minister of the Interior, General Gervais Ndirakobuca, accused them of being responsible for the "majority" of the road accidents that caused 1,300 deaths and 1,970 injuries between January 2021 and January 2022.

Two-wheelers for private use are also banned in the area - except for motorbikes with official plates or belonging to the police.

More than 600,000 people use these means of transport every day, in a city where public transport services are patchy. Customers and drivers, often young men from rural areas whose only source of income is this, will be affected.

"These alternative means of transport used to carry a lot of people every day, the bicycles are also used to supply the city with milk, vegetables and coal, the tricycles deliver products to small markets and shops," commented an economist who requested anonymity.

The decision will "have catastrophic consequences because it puts tens of thousands of drivers on the street," he added.

In one week, several thousand of them have already returned to rural areas, according to the local press.

According to the World Bank, GDP per capita was bellow 240 dollars in 2020. 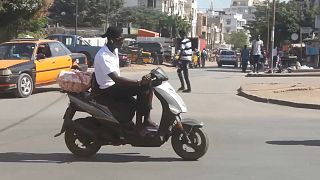 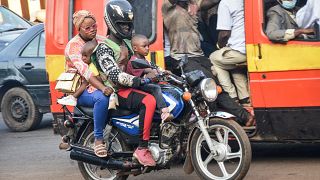