Egypt on Saturday displayed a series of recently discovered, finely decorated ancient tombs at a Pharaonic necropolis just outside the capital Cairo.

The five tombs, unearthed earlier this month, date back to the Old Kingdom (1570 B.C. and 1069 B.C.) and the First Intermediate Period that spanned more than a century after the collapse of the old kingdom, according to the Ministry of Tourism and Antiquities.

Mostafa Waziri, Secretary-General of the Supreme Council of Antiquities, said Egyptian archaeologists started excavation on the site in September.

The tombs, he said, were for senior officials including regional rulers and supervisors of the palace in ancient Egypt.

"All of those five tombs are well-painted, well-decorated. Excavations did not stop. We are planning to continue our excavations. We believe that we can find more tombs in this area," he told reporters.

The tombs were found near the Step Pyramid of Djoser, in the Saqqara necropolis, 24 kilometres (15 miles) southwest of Cairo.

The Saqqara site is part of a sprawling necropolis at Egypt's ancient capital of Memphis that includes the famed Giza pyramids as well as smaller pyramids at Abu Sir, Dahshur and Abu Ruwaysh. The ruins of Memphis were designated a UNESCO World Heritage site in the 1970s. 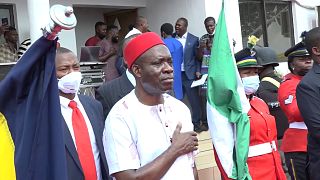