The Congolese opposition is boycotting a dialogue organized by the government ahead of local and legislative elections in the central African country.

A coalition of parties dismissed the meeting which starts Thursday in Owando in the country's north as a stunt meant to divert attention from the various crises plaguing the country.

"We must not think about what Owando should be between. Rather, we need a real dialogue that brings together all the sons and daughters of the Congo," said Jean Itadi opposition, President of the African Congress for Progress.

Last March, President Denis Sassou Nguesso and his Congo Labour Party controversially won re-election. He's been in power for a total of 38 years.

The government has defended the dialogue as necessary to achieve consensus ahead of the legislative vote to be held in five months. The ruling party is keen to maintain an overwhelming majority.

But the opposition has demanded a structured dialogue which power-sharing, constitutional reforms, and the release of political prisoners, key among them General Jean-Marie Michel Mokoko, a former commander who challenged Sassou for the presidency in 2016.

He was charged with treason and convicted. 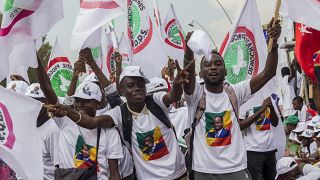