Players, developers, studios and international investors met in Cape Town for the fourth edition of the Africa Games Week.

"The majority of the games being from America, Europe and Japan, we know their cultures, we know what to expect. As much as there is still diversity in that, we, for example, in South Africa have 11 different languages. That's one thing. Each of them is linked to a specific culture that has different histories. Playing with that in game development as a means to telling a story, allows you to actually get quite a lot of content that is new and not been fully explored yet," said Alexander Poone, the Dream Shards Founder.

Africa's gaming industry is set to grow exponentially due to a soaring interest amongst its youth, and as more people get connected to the internet.

"For me, the future of this industry, and not only this industry, is in Africa. It's the new El Dorado. Centuries ago there was a gold rush in America. Today, I believe this gold rush is happening here on the African continent, and we (Africans) have to be first," said Teddy Kossoko, Masseka Games.

According to the 2021 GSMA mobile economy report, 303 million people, about 28% of the population in sub-Saharan Africa, are connected to mobile internet, a number that is set to grow to 474 million by 2025, creating an even bigger market for the gaming industry. 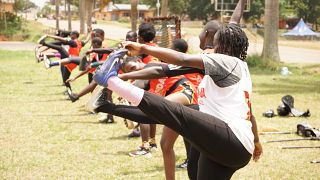