In Kampala, East Africa's party hub, the party never stops – that is until COVID-19 happened, sending the world and Uganda into unprecedented turmoil.

It is 2am here at the Monte nightclub and like pre-COVID times customers are just arriving and the party is just getting started with the MC firing up the crowd at this bar, in the outskirts of Kampala.

Nightclubs were closed as part of action taken to curb the spread of the coronavirus, but now people are enjoying returning to their old partying ways.

Alex Opua who runs this popular nightclub believes Ugandans are warming up to nightlife again.

People are in a party mood and they are very happy the turn up is not all that very good because some still fear corona others come in but the youth are very happy", Opua says.

For most revelers, returning home for the night is not an option.

They have spent two years inside their houses and the opportunity to take advantage of the nightlife is too alluring to trade for a bed.

The prolonged lockdown, especially in the entertainment sector, meant that most businesses across the country could not continue.

The owner of this club Alex Opua says he had to turn the club into a restaurant to remain afloat, businesses less able to adapt did not survive.

"Of course two years of no work is not easy. Some of our friends relocated, went to the village, changed businesses and they failed to cope up but for us we survived because we were not using one trick", he says.

As a precondition to fully reopen the entertainment sector, the Ugandan government asked all bar employees and entertainers to get vaccinated.

The government is emphasizing the need for measures like masks and hand washing.

But a visit to most entertainment venues reveals that these aren't being strictly observed.

"Tuff B" a popular television host and musician says the two year lockdown has left most Ugandans weary and policing them while they are out to party is a tough call.

"First of all I am immunized. Secondly, Like Bebe Cool said, it (the virus) goes through the throat where alcohol passes, so you are literally vaccinated when you drink alcohol !" he jokes.

Then he turns more serious : " But anyway, we still have COVID around precaution should be taken. Wear your masks, wash your hands, but most importantly get immunized it protects you at least 99 percent", says Tuff B

Lieutenant Colonel Doctor Henry Kyobe is the incident commander of the COVID-19 taskforce for the Ministry of Health.

He says the country considered all options based on the current COVID-19 situation before lifting the restrictions.

"The timing of the reopening of the economy was the right one and the tendency is that you reopen or ease the restrictions when you are at maximum containment, so we did that - though the plan was much earlier. But since the reopening, we are not seeing any surges either urban or peri-urban or rural," Kyobe says.

According to the Ugandan Ministry of Health, as of 6 February 2022, Uganda has had 162,375 people infected with the virus since the outbreak.

The country has also lost 3,563 people to the virus and has 108 people admitted in the hospital.

Kyobe says the reduction in infection has been largely due to government efforts to get people vaccinated.

"We have injected 14.5 million doses into peoples arms in this country, we are having 6 million people fully vaccinated, of the 21 million individuals targeted for vaccination - that is 49 percent of the population, 2 percent have had their booster dose and again in our stocks we have almost 10 million doses in the central vaccine stores so by and large we are doing very well," he says.

Uganda's health minister announced in January that more than 400,000 vaccine doses were to be destroyed after they expired before being used.

That's a considerable loss to a government that has administered only about 14.5 million doses and whose goal is to inoculate at least half of its 44 million people.

But although the economy is turning again, Kyobe warns it is not yet time for Ugandans to relax and think everything is okay.

"When you do have a major change in the driver, be it introduction of a variant, be it change in the transmission patterns, you give it a period of two to four weeks as you critically observe. Since the reopening of the night economy we haven't seen any surge in numbers but we are critically looking at it", Doctor Kyobe adds.

Attempts by Ugandan officials in recent months to enforce limited mandates have been unsuccessful.

A vaccine requirement for people using public transport faced opposition from operators, and bars have returned to business after an extended lockdown without strict adherence to pandemic-era rules.

Still, Africa remains the world's least vaccinated continent against COVID-19, with about 11% of the continent's 1.3 billion people fully jabbed. 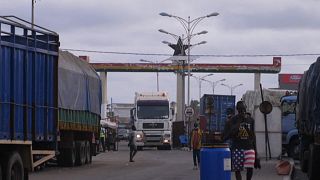