African champion Edouard Mendy was back with his Chelsea teammates at the Emirates for the Club World Cup on Wednesday. The Senegalese goalkeeper remained on the bench for last night's semi-final win over Al Hilal of Saudi Arabia and now has one more trophy in sight.

Edouard Mendy, the only player absent at the grand presidential reception ceremony of the African champions in Dakar following their final victory at the African Cup of Nations against Egypt (0-0; 4-2), had immediately joined his Chelsea teammates, currently in Abu Dhabi to play the Club World Cup.

The Senegalese goalkeeper was treated to a hedge of honor from his teammates at the club before the semi final match.

The best Fifa and CAN goalkeeper should resume his role as number one goalkeeper for the final scheduled for Saturday, February 12.

Meanwhile, Morocco's Hakim Ziyech, who was absent from the CAN and is now retired from international football, was the first to threaten the goal post for the blues, but the only goal of the match was recorded by Belgium-Congo's Romelu Lukaku when he was gifted a sitter from a defensive error.

Ziyech, again, could have saved the Blues from a final scare when Nigerian Odion Ighalo did well to get in on the act. Chelsea will now face Palmeiras in final

In other football stories, Algerian Baghdad Bounedjah is back on the pitch in Qatar with his club Al Sadd, but he is also back with goals. His brilliant strike helped the league leaders extend their lead over closest challengers Al Duhail.

Olunga, who was not at the Africa Cup of Nations, continues to pile up the goals. His latest brace brings his tally for the season to 21 goals. 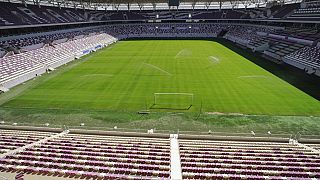