Lawmakers said they would name a new prime minister to replace Dbeibah after Libya failed to hold its first presidential election during his watch.

Dbeibah said he wants to "push for the elections," but the parliament has to agree first with the High Council of State, an advisory body based in the capital of Tripoli.

He spoke during a meeting with member of the council in the capital, Tripoli.

The move by the parliament to name a new prime minister will likely lead to parallel administrations in the already chaotic nation.

Parliament Speaker Aguila Saleh said a vote to name one of two candidates will take place Thursday, following consultations with the High Council of State.

The failure to hold the presidential election has been a major blow to international efforts to end a decade of chaos in Libya.

Originally scheduled for Dec. 24, the presidential vote was postponed over disputes between rival factions on laws governing the elections and controversial presidential hopefuls.

Lawmakers have argued that the mandate of Dbeibah's government ended on Dec. 24.

Dbeibah has repeatedly said he and his government will remain in power until "real elections" take place.

He has accused Saleh, the speaker, of fueling the division in the country. 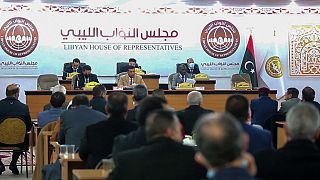