Hippos actually have a lot to say. They were the subjects of a special voice recognition study by scientists who look at animal communication. They concluded hippos can recognise each other's voices.

If you cannot distinguish the variety of voices, hippos in Maputo Special Reserve in Mozambique can. According to a new study of the noises the animals make, hippos can recognise each other's voices.

Hippos are aggressive and although they stay in groups they don't appear to do much socialising. But scientists say that they have to communicate with each other because they live in clearly defined social structures.

They even appear to have detailed knowledge of each other's voices. The report published in journal Current Biology was undertaken by bioacousticians - scientists who study the sounds and signals made by animals. The study involved playing recorded hippo noises back to different groups of hippos.

When a senior male hippo heard the sound of an animal from outside its own herd it responded aggressively, instantly recognising a stranger.

The study's co-author French Professor Nicolas Mathevon, from the University of Lyon Saint Etienne, says it is important for scientists to understand the sounds animals make, because it tells you about how they live and how they communicate. He says: "We were able to playback the signals and to ask questions to animals, because the interesting thing with playback experiments is that you really have a tool that allows you to ask questions to animals. And the basic question that we asked was 'Are you able to recognize the voice of a familiar individual and a voice against the voice of an unfamiliar individual'."

"When we emitted from the loudspeaker, we emitted the calls from an unfamiliar individual, then a few seconds later, we always got, you know, some calls in response and then at least one or two individuals came towards the loudspeaker, so they approached the loudspeaker and they also displayed marking behaviors. It means that they sprayed dung all over the place and this is the marking behavior that is typical of hippos. So it means that these unfamiliar calls, they elicit a territorial reaction." This aggressive behaviour was not shown when the scientists played voices from the same herd.

Although hippos aren't endangered, research by the University of Antwerp in 2019 showed the dwindling number of hippos across Africa is potentially harmful to the continent's rivers and and lakes. That report claimed the animals' nutrient-rich dung makes them vital to the ecosystem, pumping vital nutrients back into the waters they inhabit.

Mathevon believes population growth and more interaction between hippos and humans needs to be addressed. "There is more and more animal-human conflicts, and hippos are quite dangerous, so they are a threat, especially for the fishermen that go on the lake etcetera. So we really need to understand more the behavior of these animals if we want to manage these human-animal relationships." 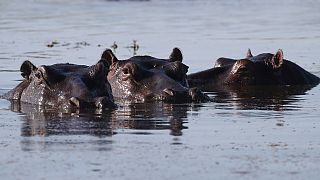