Military authorities in Eastern Congo have arrested two men in connection with the murder of the Italian ambassador in February 2021.

The police however added that the main suspect is still at large.

The commissioner for the North Kivu province accused rebels of killing Ambassador Luca Attanasio in a botched kidnap for ransom attempt.

The kidnappers were allegedly seeking more than US$1 million in ransom.

"They managed to tell us when they kidnapped his Excellency the ambassador, the one who managed to shoot the ambassador was Aspirant, and when Aspirant shot the ambassador they regretted it a lot, because they should have had a million dollars in this coup", said General Abba Van, provincial police commissioner of North Kivu province.

Aside from the Ambassador, a UN paramilitary officer was also killed as well as the driver of the vehicle.

The authorities did not say when the arrests occurred or when a trial might be taking place. 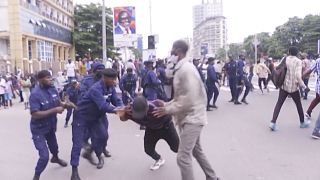