Burkina Faso clinched a place in the last 16 at the African Cup of Nations behind host and group winner Cameroon on Monday, while Cape Verde must wait to see if it goes through as one of the four best third-place teams.

Meanwhile, Malawi's players have been given an unusual incentive to upset Senegal in their final group game on Tuesday: A year's supply of eggs for every member of the squad if Malawi wins and makes the knockout stages for the first time.

Burkina Faso drew with Ethiopia 1-1 in its final Group A game in Bafoussam, and was content to hold on for the point that took it through. Cyrille Bayala put the Burkinabes ahead in the first half by sending a lob over the goalkeeper. Getaneh Kebede equalized for Ethiopia from the penalty spot early in the second half.

Burkina Faso and Cape Verde both finished on four points but Burkina Faso took second place in the group because it beat Cape Verde.

Cameroon and Cape Verde also drew 1-1 in a game played at the same time in Yaounde.

Cameroon had already progressed, but couldn't finish with a 100% record in the group stage despite captain Vincent Aboubakar putting it ahead with his fifth goal in three games at the African Cup.

Garry Rodrigues gave Cape Verde a draw with a delightful goal, letting a cross run between his legs and flicking it in with a backheel.

The final round of group games started on Monday and the 16 teams to make the knockout stages in Cameroon will be decided by Thursday.

A number of big teams, including Senegal, Ghana, Egypt, Ivory Coast and Tunisia still haven't confirmed their places in the round of 16, and defending champion Algeria is last in its group and in deep trouble.

There were surprise results in the first week of the tournament, none bigger than Algeria's stunning 1-0 loss to Equatorial Guinea on Sunday.

A draw against Malawi will be enough to send Senegal through from Group B. Malawi would be rewarded with a place in the knockout stages of the African Cup for the first time if it pulls off another shock, as well as the year's supply of eggs for each of the players. A poultry company in Malawi announced it was offering that prize if the team creates history.

There will definitely be a slice of history in Tuesday's other Group B game between Guinea and Zimbabwe, with Salima Rhadia Mukansanga of Rwanda set to become the first woman to referee an African Cup game. She will lead an all-women officiating team.

Also Tuesday, Ghana and Gabon are fighting for the second qualifying spot in Group C behind Morocco, which is through already. Ghana will play Comoros as the four-time champion faces the prospect of a group-stage elimination for the first time since 2006. Gabon will again be without striker and captain Pierre-Emerick Aubameyang against Morocco.

Aubameyang has been released by Gabon to return to his Arsenal club for medical checks after experiencing aftereffects from COVID-19. Aubameyang tested positive for the coronavirus on arrival in Cameroon and will leave for London without playing a game at the African Cup.

The top two in each group qualify automatically for the round of 16. There are also four places for the best third-place teams. 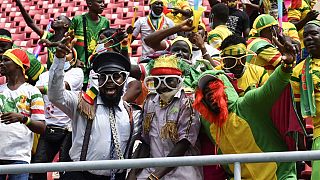