Fireboy DML is enjoying the success of his hit 'Peru' - a smash which got even bigger when Ed Sheeran offered a verse for the remix.

Afrobeat singer Fireboy DML is back with his single 'Peru'. If the title has a familiar ring it is because a first rendition of the song was released last summer. Nigerian singer's smash track was gaining traction worldwide - then megastar Ed Sheeran offered to add a verse on the remix.

"The original had really gone viral, gone global, especially in Africa, like it had become that annoying hit song that you just hear everywhere" says Fireboy. "And I was like, you know what? This is the perfect opportunity for me to just sit back, relax and let this talented man do his thing, you know, like that was the vibe I was on." More success followed - not bad for a song that took Fireboy 45 minutes to write.

The usual drums and percussions as well as the new twist given by Ed Sheeran have made the stirring song a win among some fans. When others aren't quite happy with the pair's collaboration. "People always have things to say when a song drops, you know, opinions here and there. They're like, 'Oh nah, you gave him too much space and time. You should have added a few verses, blah blah,' you know, stuff like that. But people always talk, you know, they always act like they know everything, but, I'm a very deliberate, intentional artist, so when I make a decision, I know why, and I'm glad this one paid off."

Real name Adedamola Adefolahan, the performer was born in Nigeria and answers to Damola, when not using his stage name. In fact, that's where the "DML" of his moniker comes from. He was influenced by Sheeran long before the pair collaborated on their track, with the British singer songwriter inspiring him to use accoustic guitar on his own tracks. So, while shooting the "Peru" music video with Sheeran was cool, Fireboy was initially starstruck when meeting one of his heroes.

"The moment I saw his DM I went crazy. I was jumping up and down in the studio. And then when he replied when we go talking, I was like, am I really chatting with Ed Sheeran? And then when I met him in person I couldn't even afford to be starstruck because it made me feel so comfortable because he's such an easy going, down to earth guy. And the vibe it was like we've known each other for years, like we were really close friends."

As the stars prepared for the music video, Fireboy DML turned into an afrobeat dance teacher. A funny memory for the 25-year-old songwriter. "He was in rhythm, you know, but it's Afrobeat. So he probably wasn't that familiar with the dance steps", he comments cheerful.

The song about jetting around the world has become a huge global hit. The remix and the original track accumulate more than 20 million views on Youtube. The album set for release later in 2022. Fireboy DML's U.S. tour begins on 4 February at Irving Plaza, New York. 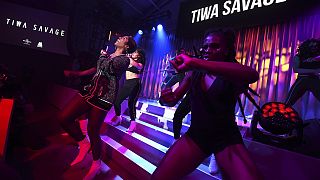 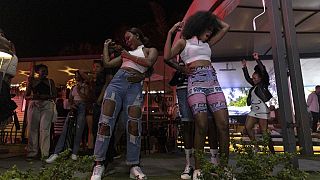