In South Africa, more than 35 firefighters are battling a blaze in the country's national parliament building in Cape Town.

According to an official, the fire started in the early hours of the morning in the third-floor offices spreading to the National Assembly chamber.

A dark plume of smoke and flames could be seen rising from the building in the centre  of the city.

The flames are also threatening the building's roof. 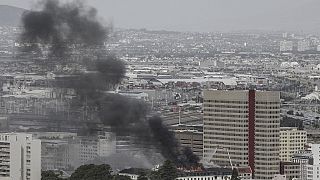