In South Africa, the period when the body of Archbishop Desmond Tutu will lie in state at Cape Town's Anglican cathedral has been extended until Friday,

Father Michael Weeder is the Dean of St George's Cathedral in Cape Town.

Many in South Africa saw Archbishop Desmond Tutu as the country's moral conscience.

"So this is his cathedral and he embraced it as such. Throughout his term, and beyond into his retirement years until about six years ago, if not four years ago, he would, every Friday with rare exception, preside and celebrate at the 0715 Eucharist on a Friday morning... it is a place that is is richly imbued with his presence", added Father Michael Weeder. 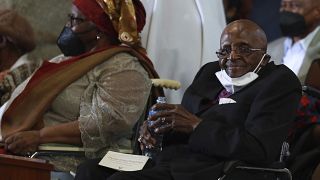