Residents of Bamako, the capital of Mali, welcome the deployment of mercenaries from the Wagner group, saying that "the Russians are welcome in Mali."

But more than a dozen Western powers have expressed anger over the deployment, accusing Moscow of providing material backing for the fighters.

"We just need to make sure that the government assumes its responsibility and says today that Mali is ready to sign with the devil for peace. The people need peace. The north of Mali and the center of Mali are now suffering from insecurity. And we welcome everyone, all those who can help us achieve peace." Kebab Diallo, Bamako resident said.

For Fatoumata Doukara, another Bamako resident, this is the expression of the disappointment with France.

"France pisses us off. It has been in our country for 10 years or more with no results. Our children are dying, our soldiers are dying every day in the north. I welcomed the arrival of the Russian forces. If they manage to put everything in order, it will make us happy." she said.

There were more voices in support of the move. "We will welcome them with open arms, without shame really. Let the European forces go where they want. It was the people themselves who asked for the Russian forces to come. It is not the authorities in place, it is the people themselves." Lassana Z Coulibaly posited.

On Friday, December 24, in Bamako, a senior national defense council  meeting was held around with the president of the transition, Colonel Assimi Goïta. The security situation as well as the evolution of measures to be taken, particularly in view of the reorganization of the Barkhane system, were discussed.

On the sidelines of this meeting, the authorities issued a statement on national television strongly denying the "allegations of some partners" about the presence of the Russian company Wagner.

It was a little after 8:00 p.m when a journalist joined the presenter of the national television news. Facing the camera, he reads a statement from the authorities that responds to the previous day's condemnations of fifteen Western countries including France, Britain, Germany and Canada on the deployment of mercenaries from the Russian company Wagner.

In the text, the government rejects these accusations, which it describes as rumors, and in the face of "these allegations", it "demands that evidence be brought to it by independent sources".

To strengthen the "capacities" of the defense forces, the Malian state only acknowledges being engaged "in a state-to-state partnership with the Russian Federation.

As such, the government recognizes the presence of Russian trainers on its territory. In addition to those of EUTM, the European Union's training mission.

For weeks, France, the European Union, the Community of West African States and the United States have been concerned about a possible rapprochement between the Malian authorities and the private security company Wagner.

Accused of abuses in several countries, including the Central African Republic, the deployment of mercenaries in Mali is considered by several partners to be incompatible with their presence in the country. 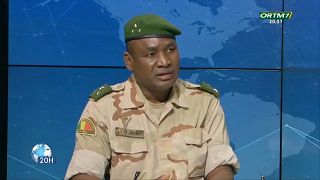