The village of Kapou in the Central African Republic developed a reputation for the production of large quantities of palm wine.

For decades that young and old make this activity their main source of income.

Philémon owns several palm tress that he exploits. Some were inherited from his father who started him on this activity from a young age.

The income generated by this activity has enabled him to start a family and build his own house.

""It's an activity that comes from our ancestors, we were born into it, and we grew up, had children and married our wives into it", says palm wine collector Philémon Edmond Ballet.

This village is also a market for palm wine that is sold in the capital, Bangui.

Man and women come here to buy this drink that is then transported and sold elsewhere.

""There are difficulties related to delays. Because of the bad state of the road, we go slowly. When we leave here in the morning with our loads we arrive in Bangui around 1pm or 2pm", claims deliverer and reseller Sylvain Sacko.

Palm wine is a highly prized alcoholic beverage in the Central African Republic.

It is also widely used in ceremonies at the expense of beer which is four times more expensive.

Client Nicolas Barnes has his own reason.

"When you consume palm wine you sleep and wake up without aches, and that's the truth", claims the regular drinker.

«It is safe to say that palm wine contributes to the Central African economy". 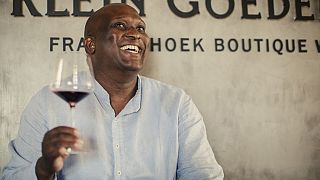